Promote the good cause

Most importantly: Don't use the "free of cost" incentive!
Foodsaving isn't about promoting access to free food, it's about fighting a waste-system that we disagree with. Make a clear statement and don't let people assume that you are bunch of cheap garbage-hungry humans. What you are doing is amazing and you know it!

The fact that your community exists already gets a lot of attention and raises awareness. Don't be shy! Get people to talk about it; share food, love and awareness! 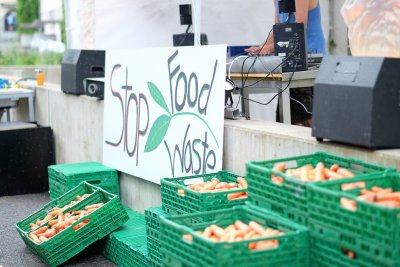 There are many possibilities to get people's interest up: Events like disco soups or pop-up Food-Share Points, where saved food gets distributed to the people, always get a lot of attention.

Or you make use of Feedback Global's toolkit and organize a Feeding the 5000 event. That's definitely gonna get you that press you need! And on top of that it's fun and a great opportunity to get to know more like-minded people!

You could also run an awareness rising campaign among politicians and other public players.
For instance, over the course of 2015 and 2016 foodsharing.de has actively participated in the Leere Tonne ("Empty bins") campaign, using a petition to ask the German government to adopt a similar law as the one voted for in the French Parliament in spring 2016, which forces supermarkets to donate their surplus food instead of throwing it away.
Food waste is becoming a more and more prominent topic in public discourse, so there are already public programmes - like the European Refresh program - , with which you could connect to support each other. Keep in mind though that, as far as political parties are concerned, foodsharing stays as neutral as possible.